Akshan Wild Rift: is a gunner general but possesses killer skills such as hiding and maneuvering. With the rune table and the standard way to build the item, it will increase the ability to put damage on the prey. The way to play Akshan will revolve around roaming and ganking mainly. 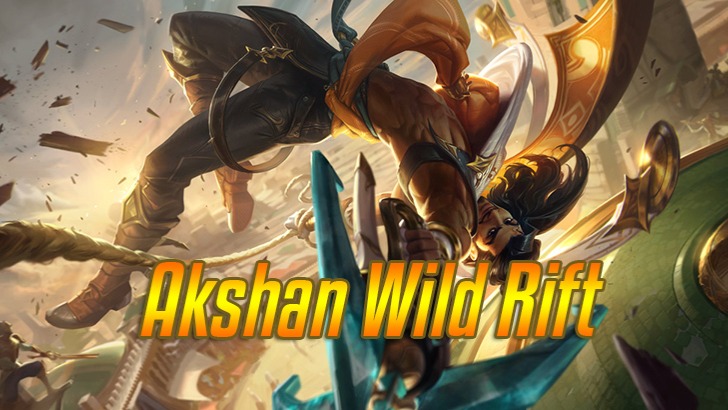 You will build items for attack effects. Since it will resonate with Akshan's passive fire an extra shot.

Heroes with assassin style are sure to have items for true damage.

If there are no new items Akshan will probably build pure damage, but in this new update there is an extremely delicious new item that is

. You hover on each item in the way to map above to see the features.

This item will both crit and deal true damage. Not to mention

Short range and very afraid of being hard CC so need maneuvering and algorithmic items.

With the best ranked build that will give you 75% crit, true damage, attack speed. The passive combo explodes on the 3rd shot, dame's absorbency has to be called.

The main skill used to poke is Boomerang revenge so you need to be first.

Every three hits from attacks and abilities deal an additional 25 magic damage. Against champions he also gains a shield that absorbs 40 damage for 2 seconds.

After launching an attack Akshan will fire a second shot that deals 26 AD. He can cancel this shot to gain 40 movement speed decaying over 1 second.

Holding down the attack button will fire the second shot.

Throws a boomerang that deals 47 physical damage, extending the range each time it hits an enemy.

Passive: enemies that kill allied champions become Scoundrels for 40 seconds. When a scoundrel dies 3 seconds of being damaged by Akshan. Akshan gains 100 gold and revives the slain allies.

Active: become camouflaged for 1.7 seconds and gain 80% movement speed towards Scoundrels. Duration is infinite while Akshan is near terrain or in a brush.

Fires a hook to attach and swing around terrain, attacking the nearest enemy for 30 physical damage per shot.

If Akshan collides with an enemy champion or terrain, he will jump off the rope.

Re-cast: jumps off the rope.

Each shot can Critically strike for 150% damage.

Locks onto an enemy champion, charging 5 shots over 3 seconds.

Re-cast: Fires the shots, dealing 26 AD to the first enemy or structure hit, increased up to 101 AD based on target's missing health.

Each shot's damage is further increased by a per centage equal to 50% of Critical rate. Shots also execute minions.

How to play Akshan

Akshan fires 1 hit will fire 1 more hit. But if you move like hit and run, it will only fire 1 hit but in return will give increased movement speed. From there you will depend on the pace of the game to adjust the damage increase.

Turn on skill 2, you just go close to the wall and in the grass, you will be invisible.

Quite small when caught by melee champions.

Easily hit your head against the wall thanks to the wrong swing.

Use minions or turrets to counter Akshan's ultimate.