Best build Corki Wild Rift and latest Runes. How to play combos, skills, pros and cons, and counter this champion in the current meta. 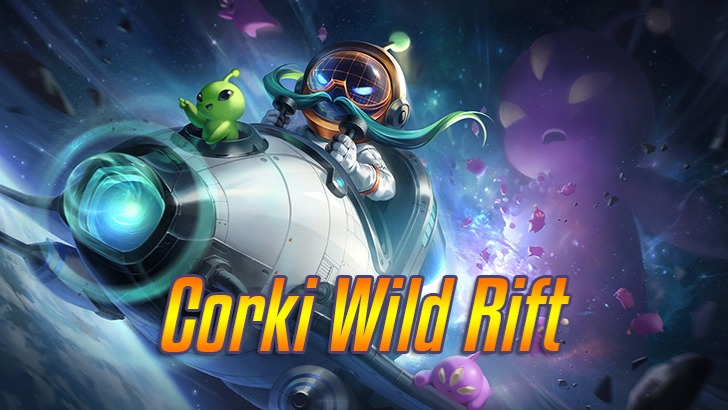 With the Corki Shock rune, it will fix and buff Corky comprehensively from increasing shock damage from Electric Shock to slowing resistance because Corki doesn't have any CC skills. Genius hunters speed up their skills, it's easy to release dame into the enemy's face.

The most important and powerful activation equipment of Corki Wild Rift is the Three Hop Sword. Mandatory equipment required.

The second most important item is the Lien Thanh Cannon, which when combined with the Directional Missile, increases the poke more fun than the much better combat.

Earning Manamune helps you have more mana and more bullets to shoot to avoid the situation when you have not gone to the market and have run out of money to fish for half of the sisters' disdain.

The remaining options are depending on the situation when you turn on the music you dance to, if you want big dame, then go to Infinity Sword and want to break armor, then go to Death Reminder. The Package: After 4 minutes, The Package is delivered to Corki's base. Corki can pick it up to gain the ability to cast Special Delivery, which grants him 35% Movement Speed out of combat for 60 seconds. A new Package arrives every 150 seconds,

How to play Corki

How to play Corki in stages in the game:

The goal is to earn a lot of money to pay filial piety to your parents, if you have furniture, you can force the road and roam. Combat, keep shooting from afar. If you see a delicious, sweet, and delicious product, turn on the shock combo in your mouth.

Avoiding the illusion of power alone, he pursued the Fire Carpet and rushed into the middle of the enemy squad to steam and fry as he ordered.

Be strong at the beginning of the game and be aggressive from the beginning, rest assured that you don't have to be afraid of father and son Farm, poke to force the enemy not to Farm. Having enough money to go home right away for shopping offers a huge advantage in terms of items.

Mid and Late Game thanks to Missile Direction, just standing in the right place to eat and look at the pot, you will be extremely useful.

The Machine Gun will be to reduce the enemy's armor, so shoot first to make it easier for your team to work.

Can both stack damage and remember to break the armor of the Machine Gun and can poke long range from the ultimate.

The Fire Carpet both has the effect of pressing the lane and can be used to escape.

Needs a lot of mana so it needs to give green buff.

The cooldown of Fire Carpet is quite long so if Corki doesn't know how to play, losing this ability will be a great opportunity to gank.

CC to the face, Time to finish the Fire Carpet and rush into the meat.

With detailed instructions on how to choose the latest Corki Wild Rift rune. And how to build a Corki Wild Rift that gives synergistic damage. Corki will create long-range pokes with the ability to shock damage to break the fearsome magic resistance.

The Brave Pilot often ventures out of Bandle City to pursue the revolutionary aircraft technology innovation that can only be found in the innovative city of Piltover. As the leader of Roaring Yipsnake, Corki is the defense of the sky here.

Please leave a comment about the Meta Corki Wild Rift and the Meta you are using for this champion at Kicdo.