Best build Diana Wild Rift and latest Runes. How to play combos, skills, pros and cons, and counter this champion in the current meta. 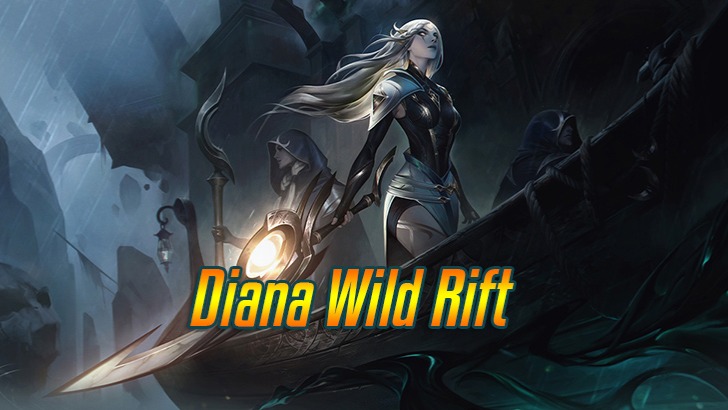 Specifically, the right way to build will include both damage and tank. Agreed to be an assassin, but it took too long to let go of the last move, so what's the point of eating a bunch of effects? Then Diana would be a gladiator killer that would make the most sense.

You increase skill 1 first to have the ability to poke enemies. Skill 2 builds armor and skill 3 at level 3 ready for stacks of damage.

Unleashes an arcing bolt of energy that deals 60 magic damage (60 +70% ?) and applies Moonlight for 3 seconds.

Lunar Rush's Cooldown is reduced to 0.5 seconds if it removes Moonlight from an enemy.

Hold: Summons the moon, slowing enemies by 20% and applying, Moonlight in a growing area.

How to play Diana

At the beginning of the game, Diana Wild Rift is quite weak, to reach the threshold of strength, you must at least reach level 3.

Diana can dash to the target up to 2 times. The trick is that you must use skill 1 before placing Moonlight mark on the enemy. Then as soon as you surf will get New Moon's cooldown immediately.

Diana's ability to initiate teamfights is extremely good thanks to her quick approach and wide-area knockdown ultimate.

Open vision in dust or dark areas with skill 1.

You can even level up a mage tank if needed.

Thanks to the skill 3 Diana has much better resistance than other mages.

Flash is the only tool to escape.

Picking ranged champions to fight Diana in the laning phase

Just dodging skill 1 Diana lost half of her power.

No need to attack or hit her orbs. Chi simply steps back until the effect wears off.

With detailed instructions on how to choose the latest Diana Wild Rift rune board . And how to build Diana Wild Rift Mage. You'll master how pacing the game in and out at the right time and taking advantage of an assassin's explosive power.

Please leave a comment about the Meta Diana Wild Rift and the Meta you are using for this champion at Kicdo.