Best build Dr. Mundo Wild Rift and latest Runes. How to play combos, skills, pros and cons, and counter this champion in the current meta. 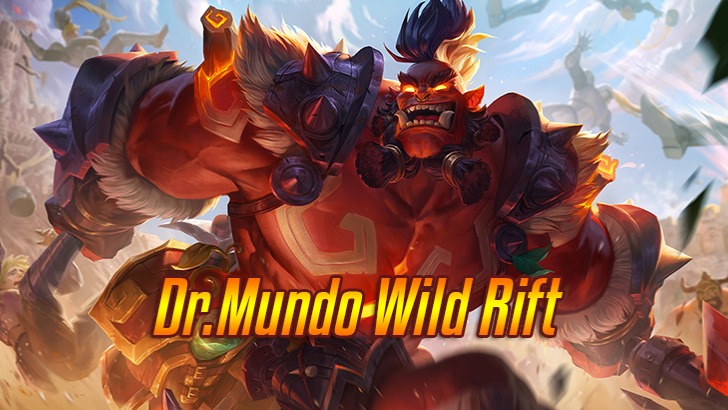 Dr. Mundo Wild Rift is a Tanker and also a fighter who can both attack and defend. This is also the most perverted champion when ready to take blood to increase damage and attack speed. And indeed Mundo's healing ability has to be called the best.

Dr.Mundo plays in the Baron lane.

The core of Mundo Wild Rift is the Spiritual Armor, the items that resist armor and magic resistance and even increase the health. Mundo's skills burn himself to create damage so creating damage resistance is the key for Mundo to fertilize the enemy team. 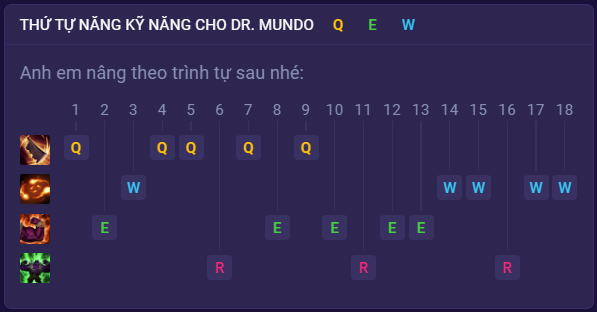 GOES WHERE HE PLEASES

Throws his bonesaw, dealing magic damage equal to 20% of the target's current Health (min: 90) and slowing them by 40% for 2 seconds.

Hitting an enemy heals Dr. Mundo for 25, or 50 on hitting a champion or monster.

Deals up to 125 damage against monsters.

Charges a defibrillator for 4 seconds, dealing 20 magic damage per second to nearby enemies.

Re-cast: Detonates the defibrillator, dealing 20 magic damage (20 + 7% bonus) to nearby enemies. If the detonation damaged an enemy, Dr. Mundo heals for 15% of the damage taken during Heart Zapper's duration. If it damaged a champion or monster he heals 30% instead.

Passive: Dr. Mundo gains 15, plus up to 30 Attack Damage based on his missing health.

Active: Empowers his next attack to deal an additional 5 physical damage (5 + 7% bonus), increased by up to 60% based on Dr. Mundo's missing health.

Dr. Mundo swats the target away if it was killed or was a small, monster, dealing the same damage to enemies.

Dr. Mundo's base Health is increased by 15% of his missing, Health. He also gains O Attack Damage, 15% Movement Speed for 10 seconds and heals 20% of his maximum Health over the duration.

How to play Dr. Mundo

With detailed instructions on how to choose the latest Dr.Mundo Wild Rift rune. And how to build Dr.Mundo Wild Rift on a case-by-case basis, hopefully you will terrify your opponent with the healing speed and the ax throwing phase of Zaun's Crazy.

If you have another better Meta Dr.Mundo Wild Rift League of Legends Wild Rift. Leave your Meta in the comments at Kicdo so we can talk.