Best build Evelynn Wild Rift and latest Runes. How to play combos, skills, pros and cons, and counter this champion in the current meta. 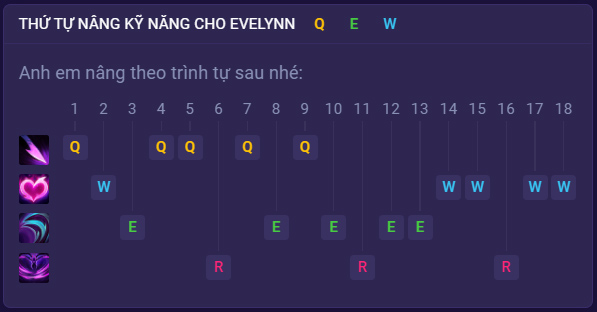 Enters Demon Shade after not attacking or casting for 4 seconds. Taking damage from enemy champions or turrets puts Demon Shade on a 1.5 seconds cooldown. In Demon Shade, Evelynn regenerates 17 Health (17 + 7.5% ) every second when she is below 320 Health (A). After level 5, Demon Shade grants her Camouflage.

Curses target champion or monster for 5 second(s). Evelynn's next attack or ability will expunge the Curse and slow them by 65% for 1 second(s).

Casting Allure does not remove Evelynn from Demon Shade.

Entering Demon Shade enhances the next cast to pull Evelynn to her target, dealing increased magic damage equal to 75 plus 5% (5% +0.02% ) of their max Health to all enemies in the way.

Evelynn briefly goes untargetable and decimates the area in front of her before warping backwards a long distance. Deals 120, magic damage (120 + 75% 2), increased to 230% to enemy champions below 35% Health.

How to play Evelynn

Before level 6 try to avoid duel with enemy Jungle. Evelynn Wild Rift is not very strong in the early stages when it lacks ult and stealth.

Turn on stealth before going to assassinate, be safe, your friends are your enemies.

With detailed instructions on how to choose the latest Evelynn Wild Rift rune. And how to build Evelynn  Wild Rift on a case-by-case basis, hopefully you will terrify your opponent with the ability to fascinate and devour prey of the Shadow Isles.