Best build Galio Wild Rift and latest Runes. How to play combos, skills, pros and cons, and counter this champion in the current meta. 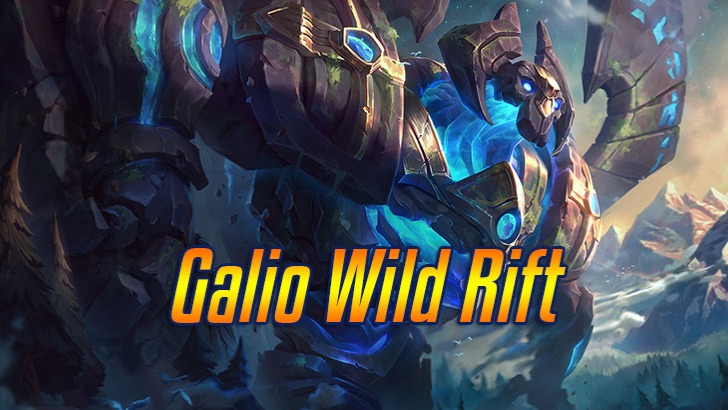 Play in the Mid lane. Possessing the Super Hero skill, Galio can appear in time to provide quick support in the remaining two lanes.

As a mage, of course Galio needed magical items.

In case your team is winning, it is necessary to combine items that increase movement or slow down the enemy. Like Magic Belt. 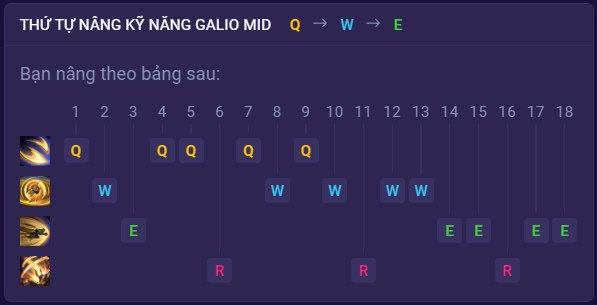 Passive: Every 12 seconds, upon taking damage, Galio gains a shield that absorbs 46 magic damage (8% ) for 3.5 seconds.

Dashes forward until he hits an enemy champion or terrain, dealing 90 magic damage (90 + 90%?) to enemies and knocking them up for 0.75 seconds.

Deals 50% damage to minions and monsters.

Grants Shield of Durand's passive shield for 3.5 seconds to all allied champions near the target and designates the position as his landing spot.

How to play Galio

At the beginning of the game, you can't be embarrassed even to accept the loss of a few soldier stats. To way minions near turrets, this time there is not enough skill and damage to push minions too fast.

Besides, when confronting other long-armed magicians, dodging the poke is already successful.

When you have reached level 3, the skill set is necessary to call for the gank forest. You know not only a combo and gank forest at the right time Galio will get all the humiliation back.

In the middle of the game, plug in control eyes at important positions such as near the birdfields deep in the enemy's heart. Once you know the path of the enemy forest, you don't have to be afraid of any father or son.

Approach the enemy first, remember to get close first and then turn on the Durand Shield to slow down the enemy, punch it a few times, run, then you use the Justice Punch to knock it up. The Battle Wings used to force the corner normally eat enough of this combo to get on the board and fuck Galio.

At the end of the game or in combat, Galio keeps pushing and using Super Hero to land in the middle of the enemy. If you miss, you will also create armor for the whole team, no matter the stain.

Farming tip: Standing slightly below, the Wings of Battle will sweep both melee and ranged minions. And in the center of the storm area, you will let ranged minions and melee minions use the passive to kill them all in one turn.

Mage but has good resistance to damage thanks to the magic shield that comes from the passive.

Possessing a skill set to slow, knock back can protect teammates on a large scale.

Takes a bit better than a mage, not a tank, so don't be too confident.

The last move is easy to miss.

The early game is weak if you can't gank, it's easy to lose a lot of minion stats.

The cooldown is relatively long.

Missing Galio's control moves will just be a real chicken.

Step back and keep your distance every time he turns on

. If you are a long-handed champion, take advantage of your attack range and poke continuously.

In combat, as soon as you see the mark on the ground

, step back immediately or if necessary, speed up. Avoiding standing too close to each other with teammates will create conditions for Galio to CC the whole team.