Irelia Wild Rift: Super dodge attack, extremely strong control resistance. Solo has to be called mom, stuns in a straight line. Sword Master Vu is extremely useful in combat with his ultimate slows wide area. With a standard rune table and a way to optimize power at Kicdo, you will be the boss of the top lane. 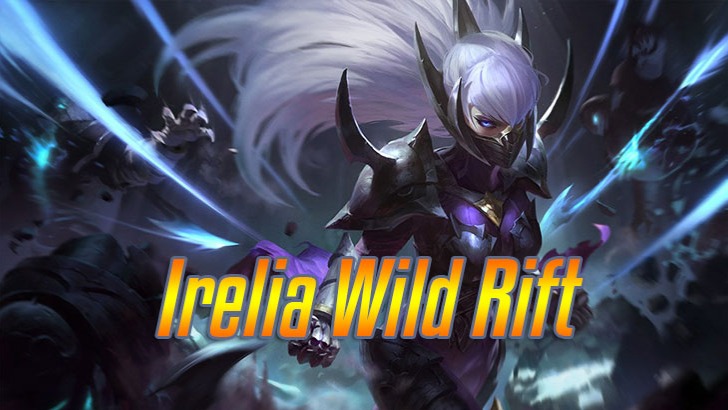 Irelia is a gladiator champion that can solo 1-1. And the indispensable item for general Irelia is

for attack speed as well as lifesteal ability. Normally, the top lane champions will have health and armor items. With the passive of

the 3rd attack, it deals magic damage. Isn't that extreme absorbent or not. Well, the damage level is based on 6% of the enemy's health inferring the more health the greater the damage.

The key to exploiting Irelia's maximum damage is to accumulate 4 passive stacks, the next attacks will deal more damage. From there, the more you dance, the greater the damage value. Hit the earn button as soon as you have enough.

This is an item that gives Irelia the ability to dance like Yasuo as well as the ability to last longer in difficult matches. Did you notice that with just 2 items on Irelia already owns 75% attack speed, even added at least 30% movement speed in combat.

The advantage of delaying the damage taken is obvious. But the main advantage is 15 skill recovery points. Irelia is able to dodge all attacks thanks to her

continuous gliding and is extremely fast. Quick cooldown is the way to create that, if there is a mistake, it can still be corrected quickly.

You must have also dimly guessed how having to dance among the heroes makes the opponent itch your eyes. The release of CC, taking damage to the mouth is like a small gift that the enemy team favors for Irelia. Not to mention because of his fast speed, he often had to rush into the middle of the enemy team to weigh 2 pounds 3 at a time. Therefore, in order to satisfy that wild pleasure, Irelia needed a lot of protective gear.

If there is an overdose, this is the corrector. Or sometimes the enemy team sees it

and doesn't bother to rush in with you. 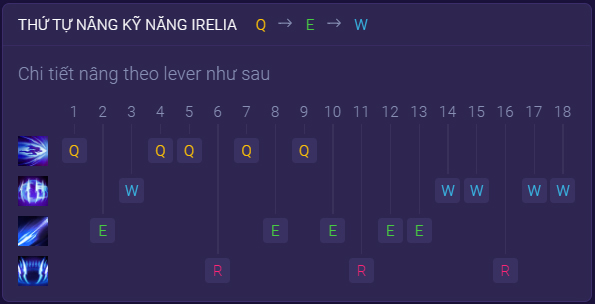 The main damage skill needs to max the first tree. It also helps Irelia to reach her goal fast and healthy. As well as for the ability to heal.

Dashes through an enemy, dealing 54 physical damage (15+ 60%/) and healing herself for 13 (19% ). Bladesurge's cooldown is refreshed if the target was Marked or dies to Bladesurge.

When aimed, Bladesurge will prioritize targets it will reset on. Deals 150% damage to minions.

Send a blade to target location. May be recast within 3 second(s) to send another blade.

The blades converge upon reaching their destination, dealing 80 magic damage (80 + 80% 2), stunning for 1 second(s), and Marking enemy champions and large monsters hit for 5 second(s).

Fires a storm of blades that deals 125 magic damage (125+ 70%) and Marks enemy champions and Large Monsters for 5 second(s).

How to play Irelia

Toss 1 in the face of the champion before rushing into dry blood. The second shot continues to face it or guesses the direction. That is, I will control the enemy champion first and then deal damage.

Marking or killing will grant

a cooldown. So if you use it to farm soldiers, hit it or wait for a small amount of weak soldiers like that to continuously squirm it to be happy. Or you can essentially take advantage of the fact that a weak minion you are sure will

kill when using, aligning the enemy champion in the middle and the combo is almost like Renekton's.

Resistant to both AD and AP damage.

Close to the target quickly.

Extremely difficult to play, requires hands faster than a skilled brain to play this dish.

Often have to rush into the middle of the enemy squad.