Jhin Wild Rift is a dame to one shot carry sniper. Here is the rune table and how to build items to optimize output damage. How to play the Jhin Wild Rift combo at Kicdo. 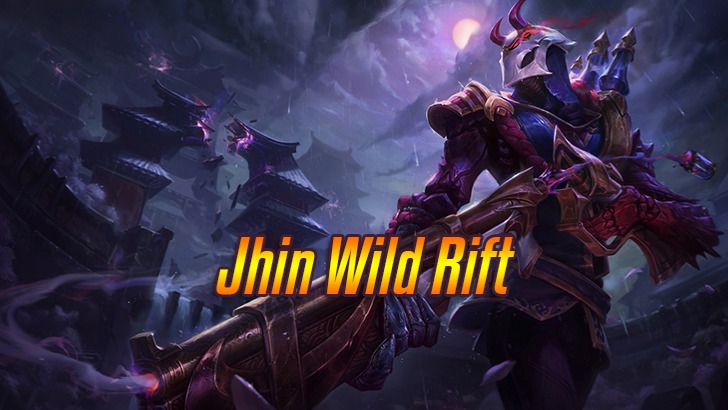 Jhin Wild Rift is a gunner who often plays the Dragon position with terrible physical damage. Jhin is the Carry for the whole team. Possessing the skill of setting up the stage with 4 shots of a terrible amount of critical damage is extremely useful in combat phases. Break the enemy formation.

will be most suitable for Jhin due to the slow fire rate so lifesteal boots are not very valuable. In contrast, Jhin is quite less mobile, so speeding up shoes will be more useful in many cases.

Jhin is a gunner, of course, the way to build Jhin Wild Rift must be an attack with physical damage. With the way to build on Jhin will ensure a large enough damage but still have reasonable resistance.

With the Magic Dance Twin Sword blocking the shock of damage, the Dance of Death offers comprehensive magic resistance and armor. Particularly, the 2nd cybernetic armor can sometimes sweep the entire enemy team when the opponent has little health left. Or at least you will no longer be the top target for assassins to rush to eat meat like crazy. 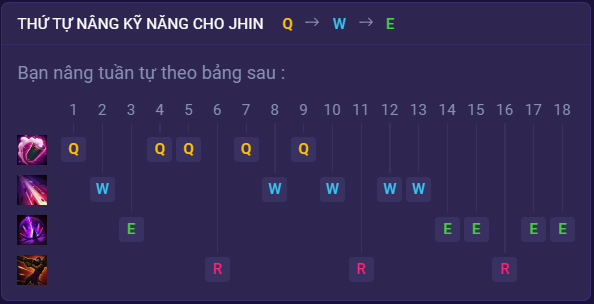 Maxed up Dancing Grenade then Deadly Strokes and Artistic Traps.

The Death Stage will increase as long as it has.

Jhin's hand cannon, Whisper, carries 4 shots before needing to be reloaded and fires at a fixed rate. (Attack speed will be converted into Attack Damage). The final bullet will critically strike and deal additional 15% missing Health physical damage(). Whenever Whisper crits, Jhin gains a burst of 10% movement speed (10% + 0.4% per 1% bonus ) for 2s.

Launches a magical cartridge at an enemy, dealing 69 physical damage (45 + 40%/+ 60% 2) before bouncing to a nearby target that has not yet been hit. It can hit up to 4 targets and gains 44% damage each time it kills.

Fires a long range shot that stops on the first champion hit, dealing 79 physical damage (50 + 50%?) to it, and 75% of that damage to minions and monsters hit along the way. If the target champion was struck by Jhin, Jhin's allies, or Lotus Traps within the last 4s, they are rooted for 1.5s and Jhin gains Movement Speed as though he had crit them.

When Jhin kills an enemy champion, a Lotus Trap will spawn and detonate where they were killed.

Deals 65% damage to non-champions and champions recently hit by another trap.

Tap the cancel button to cancel the channel.

How to play Jhin

Jhin will push the main lane to use the dancing grenade to clear the soldiers. Once the minion is cleared, Jhin can use it to pressurize the mid lane.

Or call the jungler to gank the turret at level 5. You just need to stand outside and turn on your ultimate and shoot the enemy champion in the face.

When choosing Jhin, you should ask the support player to choose champions that also have good push or control so that Jhin can use deadly strokes more easily.

Remember, Jhin has to be able to put pressure in the laning phase to be valuable when it comes to teamfights in teamfights.

Quick way to clear minions: placing art traps right in the middle of the monster field followed by a deadly final stroke of a dancing grenade is enough to clear minions.

The true art of placing traps is that you have to be an artist, it can be used to squeeze corners, can resist ganks and can also block enemies when you need to retreat.

Hold position in teamfights especially when ult is on. And remember Jhin only has 4 bullets. Type non-allin clicking.

Strong in the early game.

Jhin will be weaker than champions with CC ability to blind, stun, and dash in combat

With detailed instructions on how to choose the latest Jhin Wild Rift rune board . And how to build Jhin Wild Rift on a case-by-case basis, hopefully you will terrify your opponent with the Death Stage, a tool that threatens a large area when fighting, anyone who dares to have less blood will lose focus when fighting. The whole enemy team is sniped from afar by this Artist of Death.

Please leave a comment about this Wild Rift Meta Jhin at Kicdo.