Kassadin Wild Rift: is an assassin mage with extremely strong shock ability, high mobility, getting stronger in the late game. Best build Kassadin Wild Rift and latest Runes. How to play combos, skills, pros and cons, and counter this champion in the current meta. 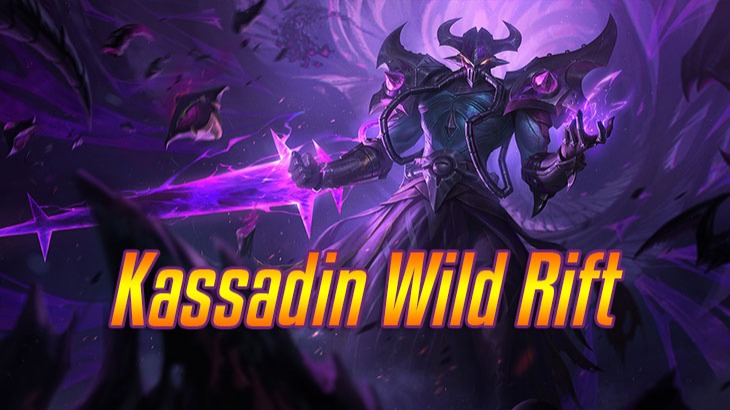 if in the combat phase

right in the middle of the enemy team, the whole enemy team will lose half a tree of health.

you need this item to make the laning phase easier against assassin champions that ramp up damage quickly.

is an important equipment, Kassadin consumes a lot of mana when using skills. This item refunds up to 25% of mana spent. Not bad to maintain energy and unleash more skills.

and if the enemy has magic resistance, this will be the 3rd or 4th item you will get.

You need to raise max

first. This is a skill for AOE damage that helps you farm faster.

You should use this skill to last hit minions in the early game rather than poke the enemy.

If the attack killed the target Nether Blade's remaining cooldown is reduced by 50%.

This skill will help you farm soldiers faster. Use it to last hit minions to maintain mana longer. Remember the Nether Blade counts as 1 stack for the Electrocute, so if you need to stack damage, hit your hand first and then use the last one, any skill to activate the Electrocute.

Force Pulse is enhanced after 6 spells are cast nearby, dealing 60% increased damage and slowing for 90% instead.

This is a skill used to clear minions quickly due to AOE damage. Can also be used to poke enemy champions. Especially with the ability to slow down the enemy it can be used to attack or escape from the enemy.

If combined with flash spells, enemy champions are difficult to dodge, imagine in teamfights you flash and use Force Pulse accurately on the entire enemy squad. And can use the ultimate to retreat to safety. Reasonable right?

Riftwalk is a skill that helps Kassadin become very mobility, can be used to roam, gank the remaining lanes. Jumping over the wall makes it very difficult for the enemy to know exactly where Kassadin is. Moreover, if used at the right time, it can also cancel the CC of some champions like Blitzcrank, poppy

How to play Kassadin

All you have to do is farm, keep the position not too high, always have a way back, control the vision to know where the enemy jungle champion is.

The early game is always camped if the opponent knows your weakness. If you lose flash, just hit around the turret just to be sure.

It is only when level 5 completes the first item that explosive damage is unlocked. You can play more aggressive and even roam if you spot a chance to kill in the remaining lanes.

Focus on teasing, find ways to destroy Kassadin at the beginning of the game. Just losing flash Kassadin will be extremely wasteful. Or simply freezing Kassadin soldiers who can't farm is nothing to be afraid of.