Best build Katarina Wild Rift and latest Runes. How to play combos, skills, pros and cons, and counter this champion in the current meta. Katarina Wild Rift is a pretty good dame virtual champion. When you have 2 bloodlines of magic damage and physical damage, you can both become pure magic and pure damage based on Riot's ability to balance 200-year generals. Whenever the group damage item is strong, I can go up in the wind, I can rotate it, any music can dance.

Currently, the magic music is better than you guys go to the magic group first, never mind if you guys change later.

The Hextech gun sword is the first required item to drain blood, and the turret for Katarina Wild Rift is a subversive item.

With Kata, there is probably no need to increase and decrease the cooldown because just picking up Phi Dao will have an Assassination cooldown.

If you accidentally bump into Zed on the road of life, immediately close the hourglass and mercury shoes.

In the new update, the Liandry mask has been reduced a lot, so it's better to go to nothingness. 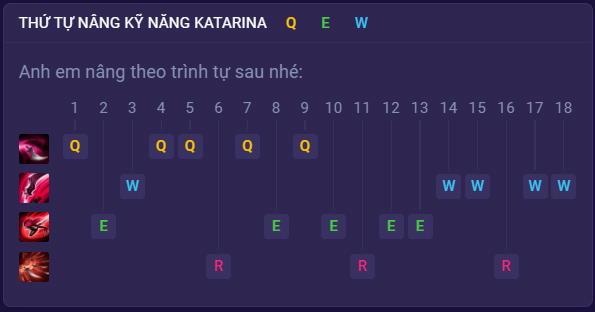 You raise the first Phi Dao max to go to the army farm. And Phi Dao is also the main source of damage. Assassinate to have a combo to fight.

Whenever an enemy champion dies that Katarina has damaged in the last 3 seconds, her remaining ability cooldowns are reduced by 15 seconds.

Throws a Dagger, dealing 75 magic damage (75 + 30% ) to the target and 2 nearby enemies. The Dagger then ricochets to the ground behind the initial strike point.

The Dagger's time in the air is the same regardless of how many, times it bounces.

Tosses a Dagger in the air and hastes Katarina by 30%.

Picking up a Dagger greatly reduces the Cooldown of Shunpo.

How to play Katarina

Passive pick up Phi Dao for very strong dame, sometimes even stronger than ulti. Because when fighting, no one will let you roam.

Mobilize thanks to the Assassination skill, now that the ultimate move can still move, who can stop it.

The ability to shock damage is also large, but just need to time it in and out in combat.

Killing on cooldown will turn Katarina into a fearless meat grinder that won't stop.

Difficult to play, difficult to spread for new players to play for the first time, there is only feed.

Has no control skills.

Depends on the item.