Best build Kennen Wild Rift and latest Runes. How to play combos, skills, pros and cons, and counter this champion in the current meta. 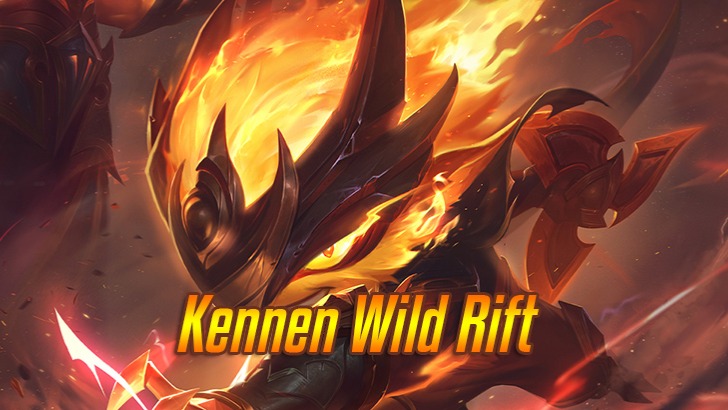 With the Wild Rift Kennen Rune, it is possible to resist the slows that make Kennen noticeably weaker. Reduced attack speed cooldown to take advantage of Kennen's passive.

Kennen has two build directions one is AD and the other is AP. But getting AP is the best for Kennen Wild Rift because Kennen Wild Rift's skills often deal extra magic damage, so there's no harm in doubling calcium.

MARK OF THE STORM

Hitting enemies with abilities places a Mark of the Storm on them for 6 seconds. At 3 stacks, the enemy is stunned for 1.25 seconds and Kennen gains 25 Energy.

Stunning an enemy multiple times within 6 seconds reduces the stun duration to 0.5 seconds.

Transform into an electric ball for 2 seconds, becoming unable to attack but gaining 110% bonus Movement Speed and dealing 70, magic damage (70 + 70% 2) to enemies he passes through. The bonus Movement Speed is doubled during the first 0.5 seconds. Kennen gains 50% Attack Speed for 3 seconds upon exiting Lightning Rush.

Summons a storm that grants Kennen 20 Armor and Magic Resist and deals 30 magic damage (30 + 15% ) every 0.5 seconds for 3 seconds. Each subsequent bolt against the same target deals 10% increased damage.

Only applies 3 Marks of the Storm to a single target.

How to play Kennen

Remember Kennen has a passive that if he hits an enemy 3 times, he will stun and that's when Kennen can do anything for 1.25s with the opponent.

Lightning darts used to poke health and gain passive. Just the timing of Lightning Speed and Thunderstorm will wipe out the enemy squad.

And if you want to surprise Flash, you're already in the middle of the enemy team running around and may or may not be a hero.

The ability to stun comes from the passive.

The hero in the combat phase brings out the eye-catching outplay.

The damage is large and quite painful.

Being able to fly a kite is extremely annoying for other baron road short-handed fighters.

Paper health is the biggest drawback Kennnen will not really take advantage of if he dies in the middle of the road without launching his ultimate.

Kennen is very afraid of encountering champions with the ability to repel in teamfights. Targets that rush in to launch Thunderstorm but are knocked up will no longer have a good tool to do so.

The passive only activates when they have 3 Marks of Thunder, so if we get 2, it's best we don't belong together.

With detailed instructions on how to choose the latest Kennen Wild Rift rune. And the way to build the mage-oriented Kennen Wild Rift hopes that you will terrify your opponent with the overwhelming amount of damage from Thunder Heart's ultimate.