Lucian Wild Rift: is a heavy AD Carry that deals quick damage. Need to play tiger from the beginning of the game. The ability to accumulate Conquest very quickly comes from the passive. Combined with the standard combo, you can recover your surfing skills in time to get out of the danger zone. Let's take a look at the standard rune table and navigate to the items that make full use of the Light Guardians at Kicdo. 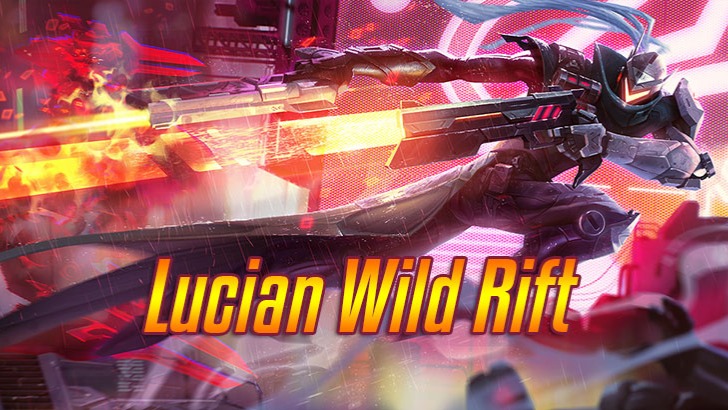 Lucian can go all 3 lanes. Reason

Top: with the advantage of a long hand to poke from afar with the vast majority of short-handed Top generals, besides thanks to the surfing skill that can be used to stretch the distance with the brothers who want to eat me immediately.

Cons you have to be green to win lane. Even a draw will risk going to the whole game because when you carry AD to the top, the whole team will lose 1 Tank champion.

And if you accidentally stumble and lose 1 life first, the possibility of snowball and losing the whole match is extremely high.

Mid: This is probably the most optimal lane for this 3-gun guy. Good trade dame, but the more Lucian trades, the more damage he gains thanks to the fast Conqueror. And Lucian doesn't rely too much on support anymore.

Bot: there's not much to complain about. However, there is a Meta Lucian that goes with Braum the easiest to get First blood . Try it and come back here and give me that legendary comment if it's true.

Lucian is a champion with 100% AD, so of course you will get items that increase physical damage and attack speed and crit percentage like other AD bags. So why is it

Once again coming from the passive of both the black man and this item. When Lucian only needs 1 ability and basic attacks will immediately activate his passive to fire 2 shots. This means you've got 3 attacks and then activate Speed ​​Capture,

If you take Lucian to bot lane, you will often encounter longer hand bets than you. The solution is to

to increase the range and length of the gun to a new height. In the teamfight, it's easy to choose a good location.

To optimize damage you will always have to use skills alternating basic attacks to make good use of the passive. Maybe you will feel short of mana, you can also increase

but when I play, it's not so much that I lack too much because I already choose gems

. Besides, I'm fully prepared with enough skills and mana to rush into the enemy. So here you can do whatever you want.

This dish is also a good choice for Lucian. Stacking to 6 stacks of this item is not difficult for Lucian from the position of the passive. Reducing armor up to 24% is very difficult to shoot. 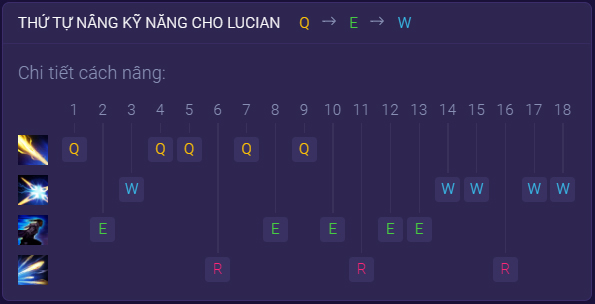 Maximize the Penetration Ray and take advantage from the first minion trade dame way and shoot 2 normal shots, you'll have more health than the enemy. Take advantage of the health to snowball the whole laning phase.

After using an Ability, Lucian's next Attack within 3.5 seconds will fire two shots.

The second shot deals 50% (A) physical damage, increased to 100% against minions. The second shot is a separate Attack that applies on-hit effects and can critical strike.

Shoots a bolt of piercing light through an enemy unit, damaging enemies in a line for 95 physical damage (95 + 60% bonus)

Fires a shot that explodes at the end of its range or on the first enemy hit, dealing 75 magic damage (75 + 90% ), briefly revealing enemies and marking them for 6 seconds.

When Lucian or an ally damages a marked enemy, Lucian gains 65 Movement Speed for 1 second.

Cooldown is reduced by 1 second whenever Lucian hits an enemy with Lightslinger (2 seconds for champions).

Lucian may use Relentless Pursuit during The Culling Recast to cancel early. Minions take 200% damage from The Culling

How to play Lucian

Lucian strength is inversely proportional to the duration of the match. Late in the game, the black guy is weaker, so this guy needs to be as aggressive as possible at the beginning of the game from every position.

Q is best used when the target is about to last hit minions so you can both clear minions faster and poke them over time.

Should focus on ganking on lanes with CC because Lucian himself does not have CC if you go Mid and feel stuck with the enemy in the same lane.

With passive, fires 2 shots after using 1 skill. This is the crux of the matter, the reason why the Conquest is fast. To be considered to be able to play Lucian, you must practice proficiently using staggered use of 1 skill, then shoot normally.

You can see that if you do the cards right, the cooldown of Chase will completely kill it in time for you to fall.

Remember the passive of Blazing Ray, sudden acceleration for Lucian you can use at the right time to run away or chase enemies.

Shorter arm span than other marksmen

Purge if caught cards you can dodge