Nunu & Willump Wild Rift:: is a champion with the ability to snowball extremely strong from the skill "Legendary Snowball". The gank tool makes Nunu and Willump's trademark. There will only be 2 ways to build, one is tank and the other is semi-tank. Here's the best way to build and run gems for the jungle and mid lanes. 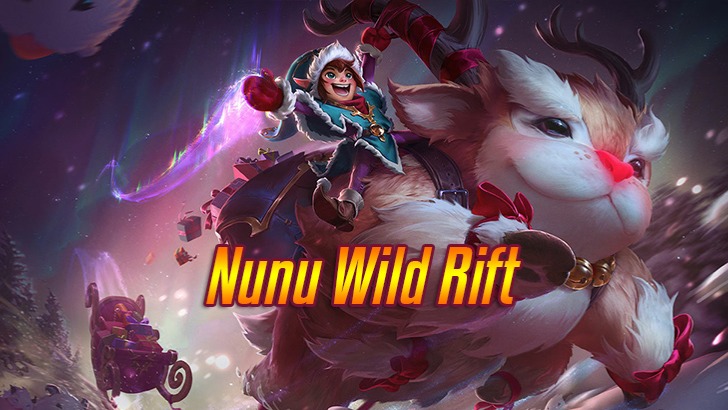 Possessing a gank tool that stuns is extremely difficult to dodge, so Nunu can be used to go two lanes Jungle or mid. It is recommended to take the forest mainly.

As a very strong champion when ganking, Nunu often has to collide and take hits. In particular, Nunu's ultimate ability to cause the greatest damage requires working time. Therefore, it is necessary to tank for Nunu to avoid the situation that he has not gone to the market and has run out of money.

With Nunu going to the jungle will be a pure tank, if you take Nunu to Mid, you will be semi-tank. Note that you won't need to go to AP and don't need to worry if you just go to the tank there will be no damage because Nunu's output damage is still enough for quality ganks.

CALL OF THE FRELJORD

A nearby allied champion with the fastest Attack Speed gains half this bonus.

Cannot trigger on the same target for 8 seconds.

Deals 350 true damage against minions and monsters instead.

Willump begins rolling a snowball that increases in size and speed over 12 seconds. The snowball explodes upon colliding with enemy champions, large monsters or terrain, dealing 35 - 175, magic damage (35 + 30% - 175 + 150% ) to enemies and knocking them airborne for 0.5 - 1.25 seconds, increasing with the size of the snowball.

Re-cast: Releases the snowball, causing it to explode on the first enemy hit.

Removes slows on cast and is immune to slows during rolling. Deals 33.33% damage to minions and small monsters.

Final explosion deals up to 150 damage vs. monsters. Deals 150% damage to monsters.

How to play Nunu

when less than 50% health left to get the most healing effect and surprise the opponent.

Be careful when rolling the snowball to avoid the wall or burn the sticky rice.

Snowballs can roll from quite a distance and the bigger the bigger the damage. You can start rolling right from the moment you leave the house to reach the 2nd pillar or take the distance divided by the speed to calculate it. Somewhere rolling 12 seconds.

press and hold to release all ammo. And in case you want to tie the target's feet, press the release button.

You can gank right from level 2 guys.

Must be strong enough to use max ping ultimate

Knocking can interrupt Nunu's Ulti. Or use flash