Best build Pantheon Wild Rift and latest Runes. How to play combos, skills, pros and cons, and counter this champion in the current meta. 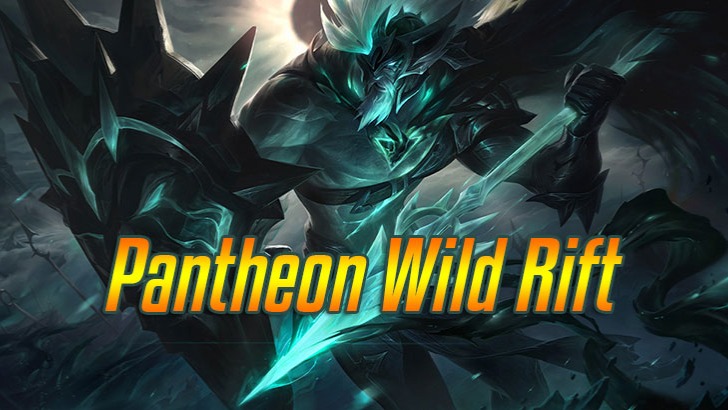 Mid lane is the most suitable lane. Simply because the ultimate Pantheon Wild Rift can attack both remaining lanes if certain conditions are met such as weak enemy health or loss of Flash.

Pantheon builds have both attack and defense. However, it is most reasonable to divide according to the ratio of 70 manual 30 manual. The reason why Pantheon is a general tends to capture enemy AD. Very strong early game but late game combat is very difficult to catch odd. 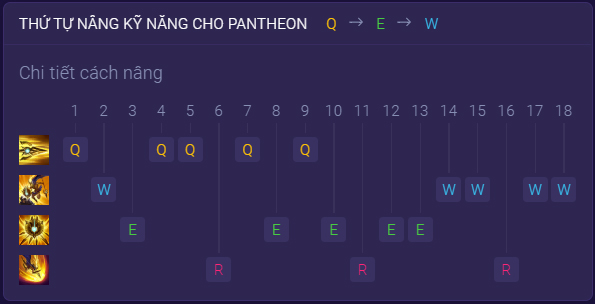 After 5 attacks or abilities Pantheon's next basic ability is enhanced.

Charge Cast: Hurls the spear, dealing the same damage to the first enemy hit and 50% less to subsequent targets.

Enemies below 35% Health are critically hit for 110 physical

Damage to minions reduced by 20%.

Mortal Will: Follows up with an Empowered attack that strikes 3 times, dealing a total of 87 physical damage (135%).

Mortal Will: When Pantheon slams his shield he gains 60% Move Speed for 1.5 seconds.

Pantheon is slowed by up to 50% when moving away from the blocking direction. Recast to end early. Damage to minions is reduced by 50%.

Active: Leaps into the air and throws a spear that deals 30, physical damage (Comet Spear damage) and slows by 50% for 2 seconds.

Damage is decreased by up to 50% at the edges of the landing area.

How to play Pantheon

With this general to optimize damage, you have to accumulate passive before jumping in solo with the enemy. Specifically, you should accumulate more than 3 passives first.

And when you have enough passive, use the skill 1 Super-Skewed Meteor Spear. Especially if the enemy champion's health is below 35%, it will also crit. If skewered at this time, the kill rate is extremely high.

Always gank as soon as you have your ultimate. Why does the sky fall to look cool like a god who never wears it? In fact, Pantheon will no longer be as strong in old age, which means late game. At the beginning of the game, he was still young and healthy, but he still got 3 shots a day.

Accumulation of damage is also fast.

Late game is not very effective.