Pyke Wild Rift: is a mobile assassin who shocks a single target but cannot tank. Gem board and how to build, how to play this The Bloodharbor Ripper combo specializing in online Ks. 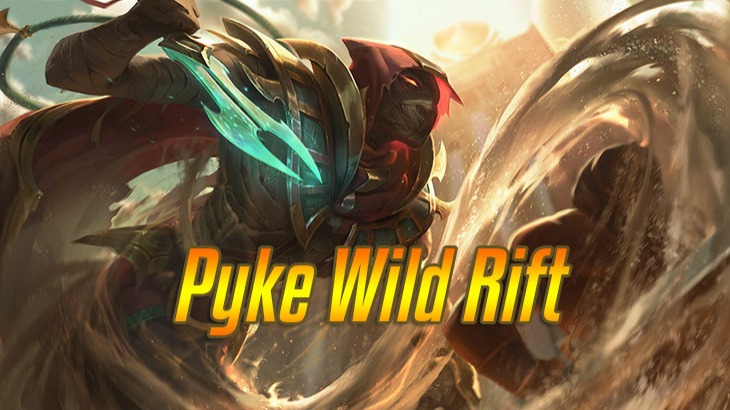 Support of course because Pyke can't build Tank due to his passive, and damage from single target skill set can't farm minions fast.

Killer generals so you will need to build armor-piercing and lethal items.

Passive does not increase health but gives you increased AD, so Pyke does not need to have too much gold to buy items but the amount of damage is still very much and this and that. 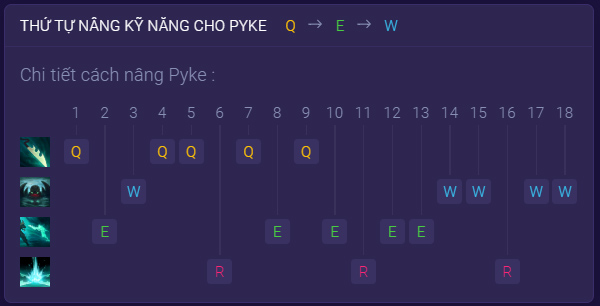 GIFT OF THE DROWNED ONES

Stores 10% of damage taken from champions, increased to 35% if there are two or more visible enemy champions nearby. Damage stored cannot exceed 80.

When Pyke is not visible to enemies, he heals for the amount of damage stored.

Charge: Slows himself by 20% for up to 3s, increasing cast range over the first 0.8s.

Release: Hurls his spear, dealing 100 AD, slowing the target by 90% for 1s and pulling it in. Releasing the ability immediately will cause Pyke to thrust his spear instead the same damage.

Deals 50% damage to non-champions. If bone skewer is overcharged it refunds a portion of it's cooldown and 50% of his mana cost.

Becomes camouflaged for 5 seconds and gains 40% movement speed that decays over the duration.

Dashes forward, leaving behind a phantom. After 1 second the phantom returns to Pyke dealing 105 AD to enemy champions and stunning for 1.25 seconds.

Marks target area with an X executing enemy champions below 250 health. Non-champions and champions above the threshold take 50% of this amount and AD.

If an enemy champion is struck, Pyke blinks to the location. If he was executed Pyke can Death from Below within 15s.

Each execution grants gold to Pyke and the last assisting ally, and an enemy champion killed inside the X by an ally grants Pyke gold.

How to play Pyke

Be strong from the beginning of the game and you also need to play the game to end the game early. Stealth approaches the prey and then hooks it to stun the female, enough damage to R to play, it's good. Ad the enemy team will give you many beautiful words and ideas.

If R hits an enemy on the other side of the wall, Pyke can jump over. If it's already R, then it should be continuous R anyway, it won't run out of juice until it's clean.

So letting Pyke kill is more effective than AD and will not suffer economic loss because it will be given gold by Pyke's passive.

Still the classic trick to pull the enemy to the tower.

Always keep an eye on the enemy champion's health bar if you're going to finish him off with R. There's a line on the health bar if the remaining health is only close to that line, R will definitely take a life.

Roam roams constantly, whenever he sees where the party is, he jumps into the fun, runs fast for nothing, no one can swear to do anything.

In addition, when the health is low, dodge to use the passive to heal to fill the fuel tank. Every time you escape, hide and escape from time to time, when the enemy ad eats a fish hook in his mouth, the need for entertainment when playing the game is a bit difficult. If you have a stupid boss, your chances of depression are high.

Tip: Can be dodged or controlled with

It is possible to build damage-resistant items such as watches, select champions to create shields, and add purification spells.