Best build Rakan Wild Rift and latest Runes. How to play combos, skills, pros and cons, and counter this champion in the current meta. 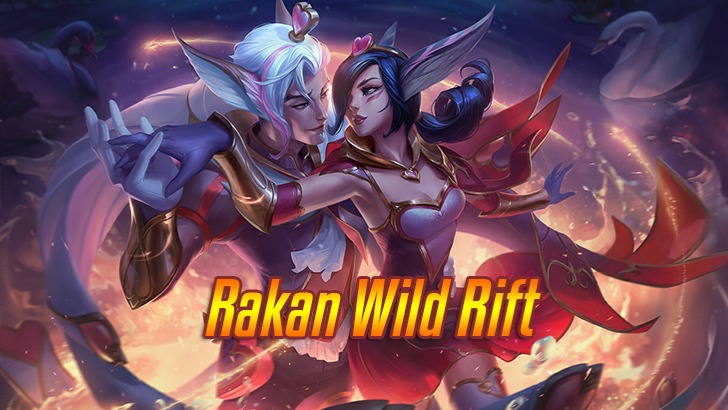 Is a support with tremendous mobility and often has to rush into the center of the fight taking a lot of damage and saving AD in every moment.

Rakan Wild Rift needs items that have healing properties, increase armor, especially the purpose of skill recovery to be able to continuously use the skill Glittering Darts, the main damage skill of Rakan Wild Rift. And other skills protect AD.

Lover's Leap - Xayah and Rakan can join each other's recall. Both will reach the Summoning Platform at the time of which the initiator's recall ends.

Dashes to a location. Upon arrival Rakan leaps into the air, dealing 80 magic damage (80 + 70% ) and knocking up enemies for 1s.

When cast on Xayah, the shield amount is increased by 25% and, the cooldown is reduced.

Gains 60% Movement Speed for 4s. Touching enemies deals 100, magic damage (100 + 50% ?) and charms them for 1s. This may only occur once per unit. The first champion charmed grants Rakan 100% decaying Movement Speed.

How to play Rakan

Spill enemy champions with Sparkling Darts, if hit, get close to allies so that the gunner will also benefit from armor creation and healing.

Combo 2: Using the first set of Magic Speed ​​and then Magnificent Appearance, the opponent will be stunned Enchantment until Flash has no effect at this time, guys.

Rakan's money is the ability to initiate combat.

Requires holding the time to enter and exit the fight very well otherwise it will be burned.

With detailed instructions on how to choose the latest Rakan Wild Rift  Rune . And how to build Rakan Wild Rift on a case-by-case basis, hopefully you will be a top-notch combat support and save AD in important moments.

Please leave a comment about this Meta Rakan Wild Rift and the Meta you are using at Kicdo.