Rengar Wild Rift: Assassin makes AD lose sleep. Approach, tie, shock damage all fast. With the standard map and gem table below, the Proud Predator will be a nightmare for AD kids. 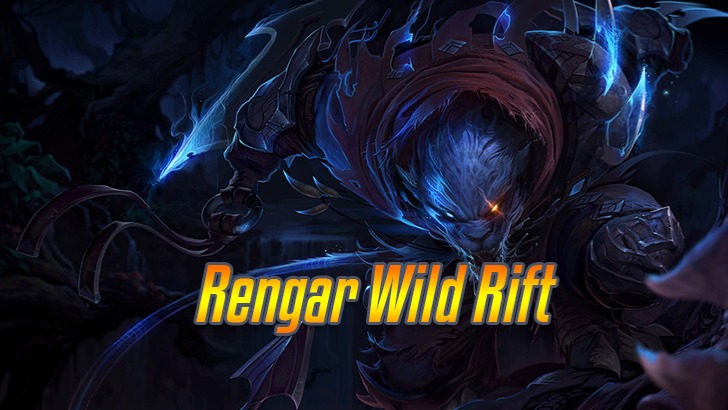 Rengar will need to build items that deal mutant damage. To be able to quickly finish the prey with

This is a must-have item in addition to the armor piercing feature when combined with the ultimate ability to reach prey it is as fast as a lover announcing that the house is empty. And gives a spike in attack speed.

armor penetration is obvious. But it will also resonate with the stealth from the ultimate for an instant plus 20-125 damage. Not to mention slow. Have you seen that with just the above 2 items, AD children find it difficult to breathe. Sometimes you have to buy oxygen cylinders and heart drugs.

There is a problem if you run out of ult to stealth or you're useless. Or get kited because Rengar doesn't have any tools to quickly reach his prey.

will give you blood. Don't laugh, don't try to turn into a kitten right away. If you eat a CC fruit without using Battle Roar, you won't have time to draw AD, it will shoot to fall.

In addition, it is also necessary to watch out for the case of stacking damage without enough damage. AD it never goes alone, but it stands still for you to pounce. The game is so easy. Therefore

will be the insurance for Rengar even in the late game when the chance to go at night to catch AD is not much anymore. Will compensate for the critical defect at this stage.

In addition, Rengar can also build spells. Then maxing skill 2 is necessary. The AD flare flies faster than the wind.

The next battle roar lifts to last longer in the jungle.

If Rengar is in brush, he will leap to the target with his next attack. 'If Rengar has no Ferocity he gains 1 Ferocity.

Gains 1 Ferocity upon casting a basic ability Reaching 4 Ferocity enhances his next basic ability, allowing it to be cast separately from the base version. All Ferocity is lost upon leaving combat.

Rengar's next 2 attacks within 3 seconds gain 50% Attack Speed, The first attack is empowered to deal an additional 43 plycat damage (40 + 5%).

Ferocity: Gains 55% Attack Speed for 5 seconds instead. The first attack deals an additional 64 physical damage (40 + 40% ) instead.

Ferocity: Deals 80 magic damage (80 + 80% ) instead. Rengar also gains 40% Movement Speed for 2.5 seconds and removes all crowd control effects from himself.

THRILL OF THE HUNT

Gains 30% Movement Speed and reveals the nearest enemy champion for 12 seconds. Rengar becomes camouflaged after 1 second(s) and can leap without being in brush. Leaping to an enemy champion shreds the target's armor by 16 for 4 seconds.

How to play Rengar

Rengar possesses both AD and AP damage. Therefore, it is a pleasure to hunt down AD children who do not have any magic resistance armor.

Farm takes experience to increase quickly until you reach level 5 to have enough capital to gank.

Pick the weakest lane and put ganking power on that lane to kill a lane.

Accumulate 4 Ferocity for the most important attack on the opponent that maximizes damage. Remember if you don't fight Rengar will lose that Ferocious point.

How to calculate Ferocity quickly, you just need to hide and jump out of the dust and then press skill 1.

The bushes were Rengar's home to good use. Jump out and jump in and out for dame.

Use Battle Roar only when taking a certain amount of damage. Because the heal is based on 50% of the damage taken. And also used to uncontrollably. Therefore, if the enemy has control skills, save it before jumping into the carnival.

Bola throw is a directional skill, so it's most useful to use when jumping from the dust to the enemy and the activation is always guaranteed to stick.

The ability to silently approach prey is good. Plus, I'm fast approaching.

Not yet level 5 is still just a domestic cat.

The blood is a bit papery, so it needs to be beaten carefully, in and out reasonably.

To maximize damage, you must accumulate 4 points of Hung ton passive.

Slow skill is a directional skill that requires a bit of hand.

Get on the hourglass early.