Best build Sett Wild Rift and latest Runes. How to play combos, skills, pros and cons, and counter this champion in the current meta. 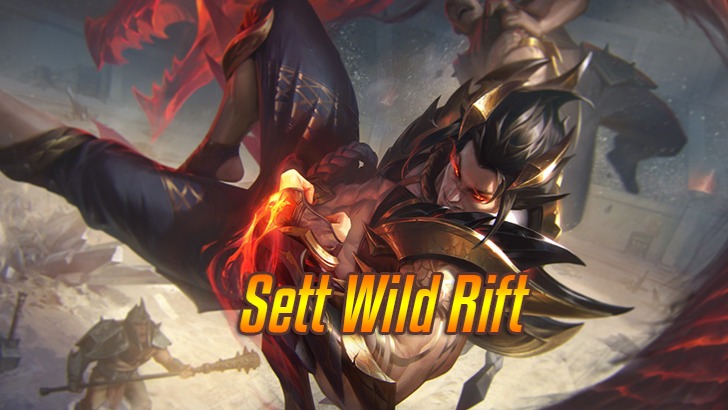 Sett is a tanker, but the output damage is extremely large. So you will build tanks and combine them with damage items.

There is a way to play Sett kills, but this should only be used when you are too proficient and the enemy team has little control. At this time, Sett is very easy to evaporate. 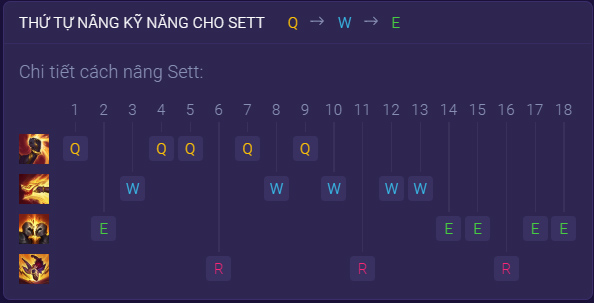 Sett gains 0.25 bonus Health Regeneration ( A ) for each 5% missing Health.

Sett itches for a fight, gaining 30% Movement Speed towards enemy champions for 1.5 seconds.

The additional damage is capped at 100 against monsters.

Active: Consumes all Grit, gaining a 100% Grit consumed shield decaying over 3 seconds. Sett then delivers a massive punch, dealing 80 plus 25% (25% + 0.15% bonus /A) Grit consumed true damage to enemies in the center (max 157 damage). Enemies, not in the center instead take physical damage.

Smashes enemies on either side into each other, dealing 82 physical damage (50 + 60% ) and slowing them by 50% for 0.5 seconds. If Sett grabbed at least one enemy on each side, all enemies are stunned for 1 second.

Grabs an enemy champion and suppresses them as he carries them forward, then slams them into the ground, dealing 200 200 + 100% bonus ) plus 40% bonus Health physical damage to surrounding enemies and Slowing them by 99% for 1 second. Enemies take less damage the further they are from where Sett lands.

How to play Sett

Normal punch first and then use

will give maximum damage.

near the end of every trade dame for the purpose of accumulating guts for the greatest output damage.

The most important thing to remember. Sett was built by Riot in the spirit of being a thorny tiger general, so the all-in fighting style does not feel weak but turns and runs. Should only fall when

there is no more.

Can bully the opponent from the very beginning of the game. Always looking to defeat the opponent, trade dame play strong to snowball. As long as you have

, you can roll and relax comfortably.

The minion position is always in the middle or near the turret because Sett doesn't have an effective tool to dodge ganks.

Go to other lanes if the enemy champion comes home to buy items. Thanks to

Sett can effectively gank other lanes.

Hug the tank and aim at the enemy AD to mess up the formation. Draw and cover for your team's AD is round the shoulder.

Do not stand in groups of three when fighting.