Shen Wild Rift: is a tank that uses the ability to protect the entire map. The rune table and the strongest build as well as the gameplay and combos of Twilight Eye. 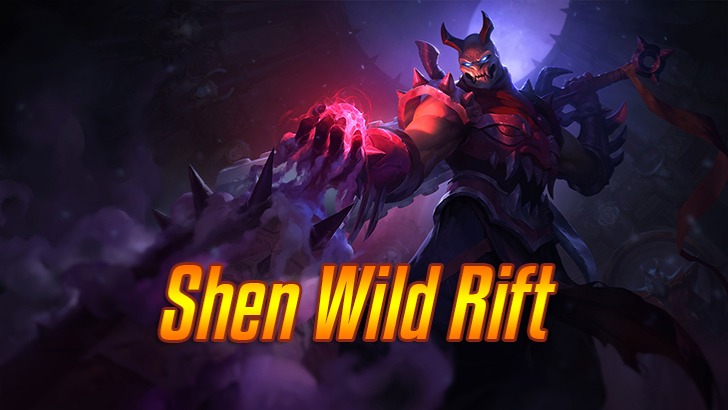 Shen Wild Rift will build gear that increases stamina for health and armor. And the ability to heal because in total fights, Shen is always the character standing between 2 to 3 enemy generals who take all damage and control.

give Shen everything Shen needs from armor, skill regeneration and especially slow.

Q is the main source of damage and gives Shen a mutation in damage and attack speed, so it is necessary to raise Max first.

Gains a shield that absorbs 60 damage for 2.5 seconds after completing an ability. If the ability affected at least one champion, Ki Barrier's cooldown is reduced by 4 seconds.

Enemy champions the Spirit Blade passes through are slowed by 15% for 2 seconds while moving away from Shen.

Sends the Spirit Blade to an allied champion, creating a zone that blocks enemy attacks for 1.75 seconds.

Upon completing the channel, Shen teleports to the target ally.

How to play Shen

Actively use Nhat Thong when seeing teammates are solo 1 vs 1.

Invisible is used both to attack and back when being ganked. Judge the enemy jungle's lane to choose the right time to use it.

Early game Shen's goal is gold, play it safe and level up as quickly as possible. Remember Shen is not very strong in the early game.

Of course, if you're weak, you don't need to push the minion high to keep the minion close to the turret.

In the middle of the game, every hot area would fly to 2 hit 1 without a single mouse and lame. At this time, Shen is very strong and can take the frontline position.

Extremely good resistance comes from the inside.

The ability to negate countless damage.

Create outplay mutations in teamfights, ganks thanks to the ultimate.

Protect AD anywhere, even in bed.

Getting the most out of Shen's power requires good coverage.