Best build Shyvana Wild Rift and latest Runes. How to play combos, skills, pros and cons, and counter this champion in the current meta. 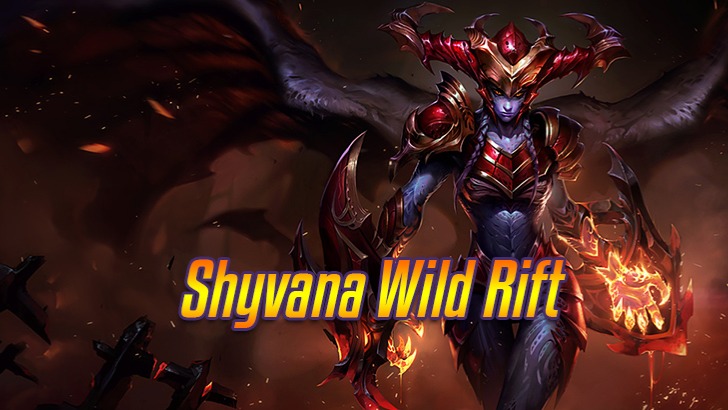 Shyvana Wild Rift is both a fighter and can be a tank for the whole team. Shyvana has a special mixed magic and physical damage that will be extremely powerful when in dragon form.

Every 100 stacks of Draconic Bloodline enhances one of Shyvana's abilities.

Dragon Form: Strikes in a larger area and applies on-hits to all enemies.

Acquiring 100 stacks of Draconic Bloodline, grants Weight of the Mountain, causing Twin Bite to slow enemies hit by 40% while in Dragon Form

Deals 30 magic damage (30 + 25%Bonus) per second to nearby enemies and hastes Shyvana by 30% decaying over 3 seconds. Attacking extends the duration of Burnout up to 4 seconds.

Acquiring 200 stacks of Draconic Bloodline, grants Wings of the Cloud, causing Burnout to haste Shyvana by an additional 25% while in Dragon Form.

Launches a fireball that deals 78 magic damage (60 + 30%/ + 40%?) to enemies hit and Scorches them for 5 seconds. Shyvana's attacks on Scorched enemies deal bonus magic damage equal to 3% of their max Health.

Acquiring 300 stacks of Draconic Bloodline, grants Breath of the Infernal, converting the damage dealt to Scorched enemies to True Damage while in Dragon Form

Passive: Generates 1 Fury per second and 2 Fury per attack. At 100 Fury, Shyvana can cast Dragon's Descent, Shyvana remains in Dragon form until she has consumed all of her Fury.

Active: Transforms into a dragon, gaining 150 Health and flying to a target location. Enemies along Shyvana's path take 150 magic damage (150 + 80% ) and are knocked towards her landing point

How to play Shyvana

Shyvana  is stronger than champions with low mobility and no CC.

Shyvana will lose to champions with ranged range and lots of stun skills.

With detailed instructions on how to choose the latest  Shyvana ngọcSnail Rift board . And  how to build Shyvana Wild Rift on a case-by-case basis, hopefully you will terrify your opponent with the dragon's breath that goes all the way or the Dragon Nu's extremely strong resistance.