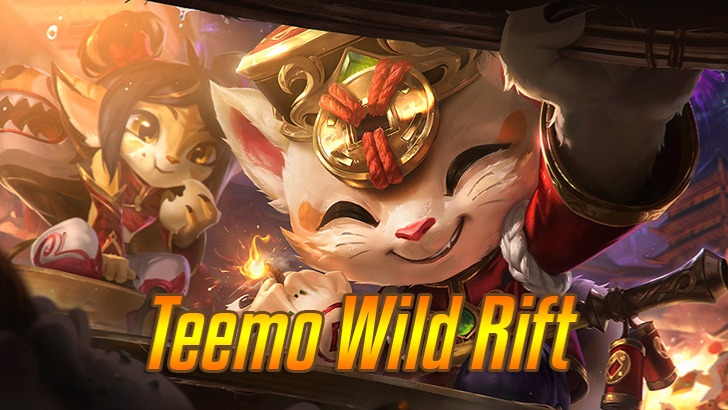 With the above rune board, it will support Teemo's attack speed and magic resistance. I created a Teemo monster that burned horribly.

Teemo Wild Rift is a gunner champion that deals magic damage in guerrilla combat. Teemo has the ability to become invisible after standing still for 1.5 seconds.

After removing stealth, Teemo gains attack speed for 2 seconds. Interestingly, Teemo can also become invisible if he moves into the bush for 1.5 seconds.

His main skill is the first skill 'Blind Dart' that deals damage with Magic Power and the target hit by this skill will be blinded for his attacks and will miss the target for a short time.

His other skills include Quick Run (plus movement speed) and Poison Shot (poison the target.)

Noxus' Teemo's ult places an invisible trap and weapon for 1 second. When an enemy champion passes through it, the trap will explode dealing damage and slowing them in the process. This trap also provides vision for the whole team in a short area of ​​the map.

You can build items in the direction of Max's cooldown to gain mushrooms quickly.

Teemo's main damage comes from hand attacks so an increase in attack speed is necessary and the item for Wild Rift Teemo all he needs is Nashor's Fang. 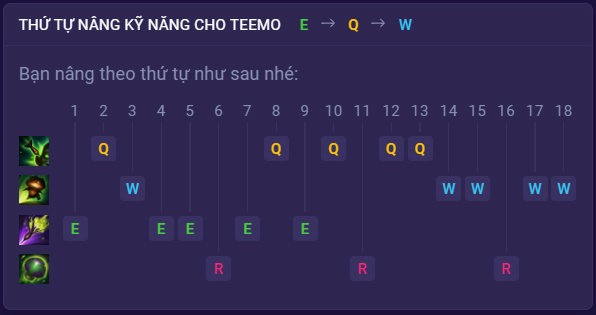 Attacks from blinded enemies will miss their target, dealing no damage and failing to apply on-hit effects.

Passive: Grants 10% Movement Speed if an enemy champion or structure has not damaged Teemo within the last 5 seconds.

Active: Rolls a short distance forward and sprints for 3 seconds. During this time, Move Quick's bonus is doubled and cannot be removed by damage.

After a delay, become Camouflaged. Moving outside of brush for more than 3 seconds ends this effect. I

Camouflage: Hide from champions by keeping them out of Teemo's detection radius. Enemy turrets reveal camouflaged units near them. Attacks and offensive abilities end Camouflage early.

How to play Teemo

Dragon pits, baron pits, river areas, or areas on the map where you think a skirmish or teamfight is about to happen.

Thanks to his kit, Teemo is extremely good against Tank/Bruiser champions and also against champions that deal damage from auto attacks. (generally marksman) Teemo's ultimate 'Noxus Trap' is the main arsenal of his kit, which can make a big impact in teamfights and teamfights in the later stages of the game. game.

Teemo has low defense in the early game and is weak against heavy Attack Power / Magic Power assassins that can kill him with a simple combo. If played the wrong way, Teemo has almost no effect in teamfights.

Use the scanner to detect the fungus of Teemo Wild Rift.

With detailed instructions on how to choose the latest Teemo Wild Rift rune board . And how to build a mage-oriented Teemo Wild Rift hopes you will terrify your opponents with the stealthy ability and terrifying damage mushrooms of the Agile Scout. One of Bandle City's greatest defenders.

Please leave a comment on the Meta Teemo Wild Rift and the Meta you are using for this champion at Kicdo.