Best build Varus Wild Rift and latest Runes. How to play combos, skills, pros and cons, and counter this champion in the current meta. 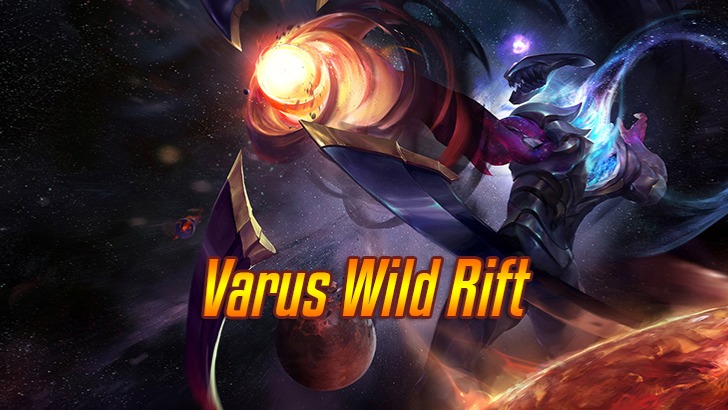 Varus Wild Rift is a marksman with both physical and magical damage. Deals long range damage.

Anonymous's sword is almost an item that is too suitable for the damage that Varus deals. Lifesteal, attack speed, and crit are the builds that Varus needs.

Like many snipers, Varus can't withstand the shock of damage, so Ma Vu Death is a necessary item to protect Varus. Death Reminder to destroy enemy armor. 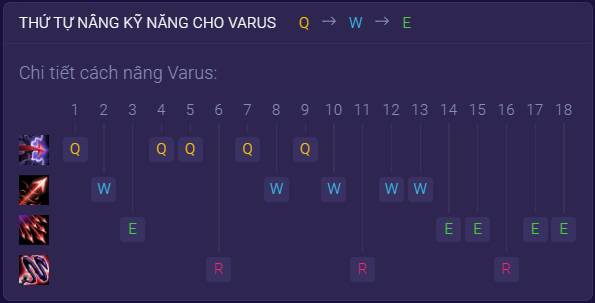 Gains 40% Attack Speed for 5 seconds on a champion kill or assist, 20% on non-champion kills.

Hold: Draws the bow, gradually increasing the range and damage for the next shot. Movement Speed is slowed by 20% while preparing to shoot.

Piercing Arrow's cooldown is reduced by 4 seconds if the arrow detonates Blight stacks on at least one enemy champion Piercing Arrow fails if not released after 4 seconds, but will refund 50% of its Mana cost.

Active: Doubles the bonus on hit damage from Blighted Quiver's passive for 6 seconds. The next Piercing Arrow deals bonus magic damage equal to 7% to 13% (A) of the target's missing, Health, increased by 0% – 100% (based on Piercing Arrow's channel time).

80 Fires a nali ot arrows that deais /u pnysicai aamage ( 70 + 60% bonus ) and desecrates the ground for 4 seconds. Desecrated ground slows enemies by 25% and applies 40% Grievous Wounds.

Flings out a tendril of corruption that deals 150 magic damage (150 + 80% ) and roots the first enemy champion hit for 2, seconds.

The corruption then spreads toward nearby enemy champions, also immobilizing them on contact. Immobilized units gain 3 Blight, stacks over the next 3 seconds.

How to play Varus

Varus will be weaker than champions with CC ability to blind, stun and stack damage in combat

With detailed instructions on how to choose the latest  Varus Wild Rift rune board . And how to build Varus Wild Rift on a case-by-case basis, hopefully you will terrify your opponent with this Arrow of Vengeance's ability to capture the whole team and poke blood from a long distance.

Please leave a comment about this Wild Rift Meta Varus at Kicdo.