Best build Vi Wild Rift and latest Runes. How to play combos, skills, pros and cons, and counter this champion in the current meta. 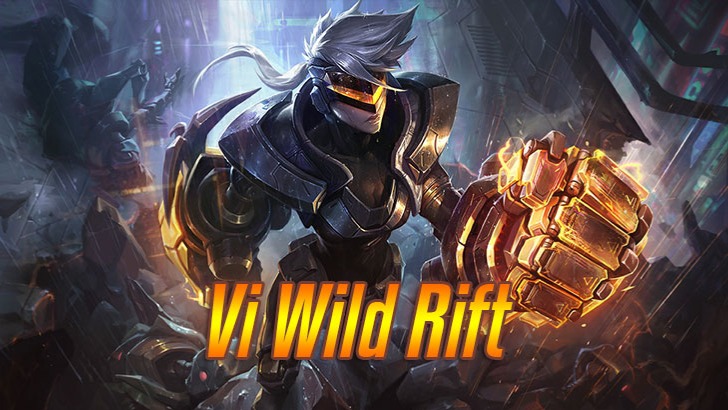 Vi Wilderness is a fighter with the ability to penetrate armor. The rolling style is not afraid of collisions and knocks with a series of AOE skills, so there is no more suitable position for Vi than going to the jungle.

The way to build Vi Wild Rift is to quickly own damage items and blood-increasing items combined with the passive of armor-piercing items that will be true love for Vi. Tam Hop Sword is a must-have item when it comes to providing the attack speed that Vi desperately needs to create a big enough threat both in ganks and teamfights.

Depending on the situation on the enemy team, which champion is too green, then build a counter item for example green AP, then go to the Mace Gai. 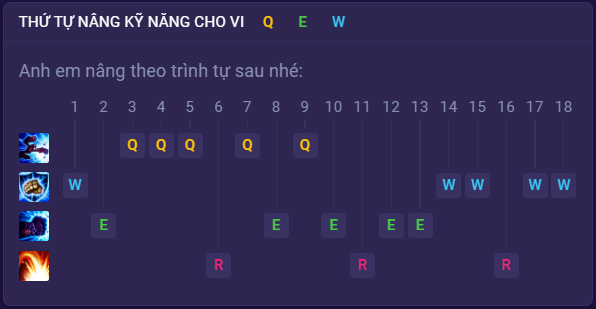 Hold: Charges up a powerful punch, slowing Movement Speed by 15% while increasing the punch's damage and dash distance.

Cast: Dashes forward dealing 55 to 110 physical damage (55+ 80% bonus to 110 +160% bonus ?) and applying Denting, Blows to all enemies hit. Colliding with an enemy champion stops the punch and knocks them back.

Deals 75% damage to minions and monsters.

Passive: Hitting an enemy with an attack or ability grants a stack of Blast Shield, up to 5 stacks.

Active: Generates a shield that absorbs 60 damage for 3 seconds. Each stack consumed adds 10 (1.5% max ) to the shield. At max stacks also grants a burst of 47% Movement, Speed.

Blast Shield stacks fall off one at a time and a max of 1 stack is added per attack or ability.

Vi stores a new charge every 14 seconds and can hold 2 charges at once.

Vi Reveals her target and cannot be stopped while chasing it down. Enemies in the way are knocked aside and take 75% of the damage.

How to play Vi

Go Gank often in the early game because Vi is quite strong at this stage. Especially when there's a ult, it's all about ganking.

If you can't gank, it's easy to eat dragon game.

Vi is stronger than champions with less armor.

Vi will lose to champions with the ability to stack damage and maneuver.

With detailed instructions on how to choose the latest  Vicch Chien rune board . And how to build VietSpeed ​​item on a case-by-case basis, I hope you will terrify your opponent with the ability to break armor and the ability to pursue prey of the Piltover Guards.