Wukong Wild Rift: is a Gladiator, the strongest way to build, needs armor and blood to be able to make the most of the power from the dreamlike opening combat ultimate. And the Conqueror gem will quickly accumulate full Wukong which will bring nightmare to slow AD carry. 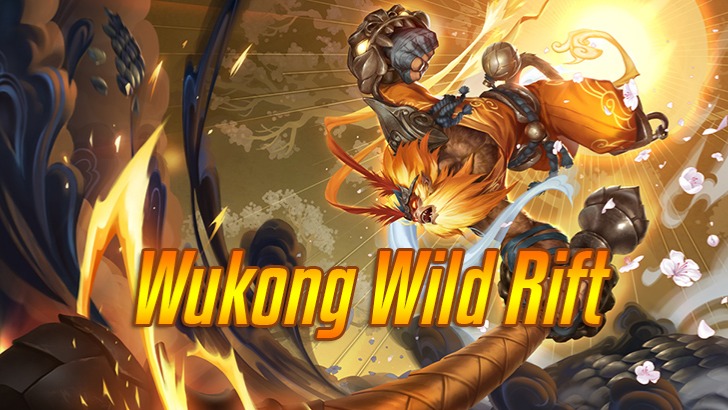 will play in the single lane Baron lane. Or Forest if you plan to use Wukong as an assassin. However, if you go to the jungle, you will have a hard time due to the ability to clear the forest very slowly.

The first important item to go up for Wukong Wild Rift is the Black Ax when creating both armor for Wukong and movement speed.

There will be a direction for Wukong to build in the direction of full damage to be an assassin with lethal items and the lane will be mid.

However, it will not be really effective if the enemy team has a very strong assassin and does not make the most of the power of the ultimate move, Tornado requires a lot of resistance to create a lot of harassment and confidently rush into the middle. enemy heart.

Therefore, equipping in the direction of gladiators is the best for Wukong.

And in case you are not strong enough to row in the direction of killing power and divine feed, you need to have a strong spirit before the insults of the young people playing with you. 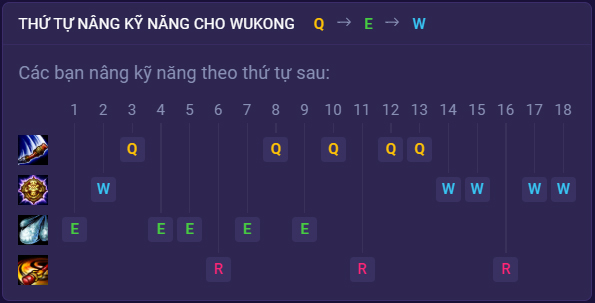 Level 1 is the top choice right now, since you have passive magnetic armor and skill attack speed, there is almost no champion that can match this level 1 Wukong.

Passive: Gains 150 range for his next attack after casting an ability for 5 seconds.

Will cancel animation of attacks used for stacks or turret pushes. You will be quite surprised with the range of the Thousand-pound Thieves and can even hit the wall if the wall is not too thick.

It will also break the opponent's armor, so if you are going to stack damage, use it first to maximize the amount of damage dealt.

Will reduce the cooldown associated with basic attacks. Even when cloned, the clone will also attack normally increasing and decreasing the cooldown by doubling calcium for nothing.

Becomes invisible for 1 seconds, leaving behind a clone for 3 seconds that attacks nearby enemies for 20% damage.

The clone will mimic Wukong's Golden Staff and Cyclone.

This is Wukong's branding skill both in Wild Rift and in real life or movies. With the ability to clone the enemy will not know where Wukong really is. Especially when activating Wukong will receive a large amount of speed in an instant to help you approach the goods or fall when it's too cold. Be careful not to slide over the wall.

Dashes up to an area that damages an area and grants 1 attack speed for an instant. Extremely strong at level 1, so it can be added first to immediately overwhelm.

Extends his staff and spins to gain 20% Movement Speed, dealing physical damage equal to 141 (220% ) plus 8% of enemies' max health over 2 seconds. Enemies that are hit for the first time are knocked up.

Cyclone can be recast once within 8 seconds.

Knocked up 2 times, also gained the armor reduction from the Black Ax and also reduced the cooldown of the Thousand Pounds Iron. This is a tool that, as mentioned from the beginning, is a super skill to initiate combat to harass the entire enemy squad. Works well to create a bunch of combo poses from 69 to 96.

How to play Wukong

Wukong Wild Rift at the beginning of the game is extremely strong. As soon as you reach level 2, you can pounce on the prey and immediately force him to at least lose the flash.

In the teamfight, always keep the ultimate Cyclone because it is the dream fighting tool of all squads that both messes with the squad and creates a lot of valuable knock-up CCs.

Adding the virtual variable that always attacks the enemy on the side instead of directly trying to try will immediately know the value of this action.

Golden Scepter also deals damage to turrets, at the same time resert attacks -> brothers who attack normally then use Golden Staff will maximize damage more. This can be understood as a skill to cancel animation of normal attacks.

if you're going to gank suddenly

Wukong is very strong in 1v1 matches thanks to his second ability 'Tricky Warrior' You can build Wukong as a semi-tank champion and is excellent for pushing lanes in the mid to late game. His ultimate 'Tornacle' can take down multiple enemies at once.

While Wukong's ultimate is on cooldown, you can't get the desired results in teamfights with him unless you attack the enemy champion from the flank. The ability to push the road is not really too impressive. Only shines in combat.

Wukong is stronger than champions with low mobility and no defense in the early game.

Wukong will lose to champions with high mobility with the ability to stun and fly kites.