Best build Yasuo Wild Rift and latest Runes. How to play combos, skills, pros and cons, and counter this champion in the current meta. 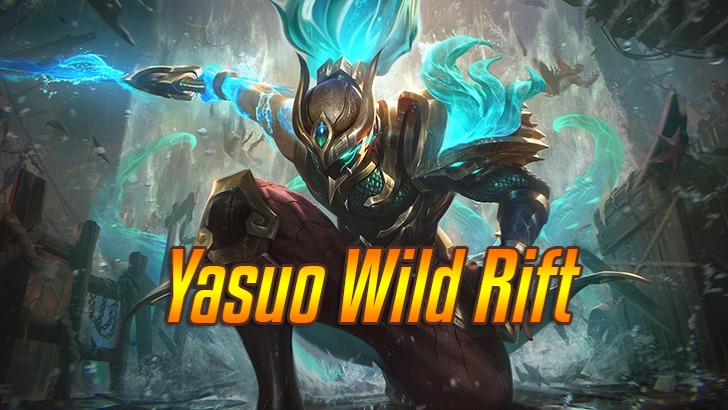 Yasuo Wild Rift is both a warrior and an assassin thanks to his skill set that can both withstand and dash quickly and finish his prey.

Yasuo in Wild Rift is often used to go mid and Baron, Dragon.

Flash is not only used to escape quickly, but also used to combine with skills to create combos.

The way to build Yasuo Wild Rift is items that increase physical damage, attack speed, crit and recovery. The amount of bonus attack speed will help the cooldown be shortened quite a lot.

The first four items are the core for Yasuo when providing critical damage with splash damage, attack speed.

Phantom Dancer adds a shield when you have low health left. It's quite useful because when Yasuo glides into the enemy team, unfortunately, he has CC with low health, but with magic dance, the sword can still be somewhat resistant.

With the above items, grant magic resistance from Maw of Malmortius if the enemy AP is hostile to you. The health from the Black Cleaver and the armor breaking damage as a percentage of health are really good.

The death reminder gives deep damage to use when the enemy team has many armor champions and heals. The Death's Dance is simply a comprehensive craft. 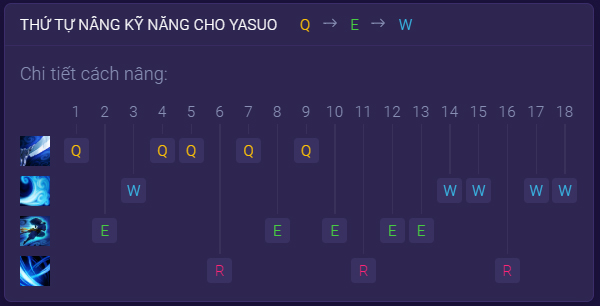 Way of the wanderer

Resolve: Moving builds flow, which is tracked on Yasuo's resource bar. At max flow, damage from a champion or monster grants a chield that absorbs 100 damage and lasts 2 seconds.

If tapped during sweeping blade's dash, steel tempest will strike as a circle.

Steel tempest is treated as an attack: it can critically strike for 180% bonus damage and applies on-hit effects on the first unit hit. Cooldown and cast time are reduced by attack speed.

Creates a 300 unit wall that blocks all enemy projectiles for 4 seconds.

Dashes through target enemy, dealing 70 AP. Each cast increases the next dash's base damage by 25% up to + 50%.

Cannot be re-cast on the same enemy for 8 seconds.

If steel Tempest is tapped during this dash it will strike as a circle.

Blinks to an airborne enemy champion, dealing 200 AD and holding all airborne enemies in the area in the air for an additiona 1.3s. Grants maximum flow but resets all stacks of gathering storm.

for the next 15s, critical strikes gain 30% armor penetration.

How to play Yasuo

Move continuously to check "Race". Once your passive is full, look for a poke opportunity, at this point you already have a shield that results in you winning by one attack against the enemy champion. This is how to take advantage of the laning phase.

steel tempest also counts as a basic attack, which deals critical damage with on-hit effects. Therefore, towards the end of the game, the

steel tempest becomes stronger thanks to the combination with owned equipment.

Wind wall is an important skill that helps Yasuo counter all skills with bullets from the enemy team's main damage-causing generals. Especially useful when fighting in narrow terrain blocking all damage but all enemy AD ults are great.

Windwalls are always a useful tool to block damage, but the cooldown is long so only use when you really need it.

Skim through the minions with

steel tempest but the trick here is to always leave at least 1 minion so you can exit back when trading damage with the enemy. If necessary, you can also use the

Choose the right time to R. Remember Yasuo can Terrorize all 5 enemy members so if he can call Malphite or a knock up on 2 - 3 members, the Last Strike will be most effective.

In the middle and late game at the time of total combat, Yasuo is not the type of general to block, initiate combat, take damage. Wait for the opportunity when the enemy team is being CC or knocked up, please rush in. Because Yasuo has a low amount of armor and health, short attack range, if you get CC at the beginning of the fight, you will quickly be destroyed.

How to combo Yasuo Wild Rift